Home What to consider when choosing hydraulic fluid

What to consider when choosing hydraulic fluid 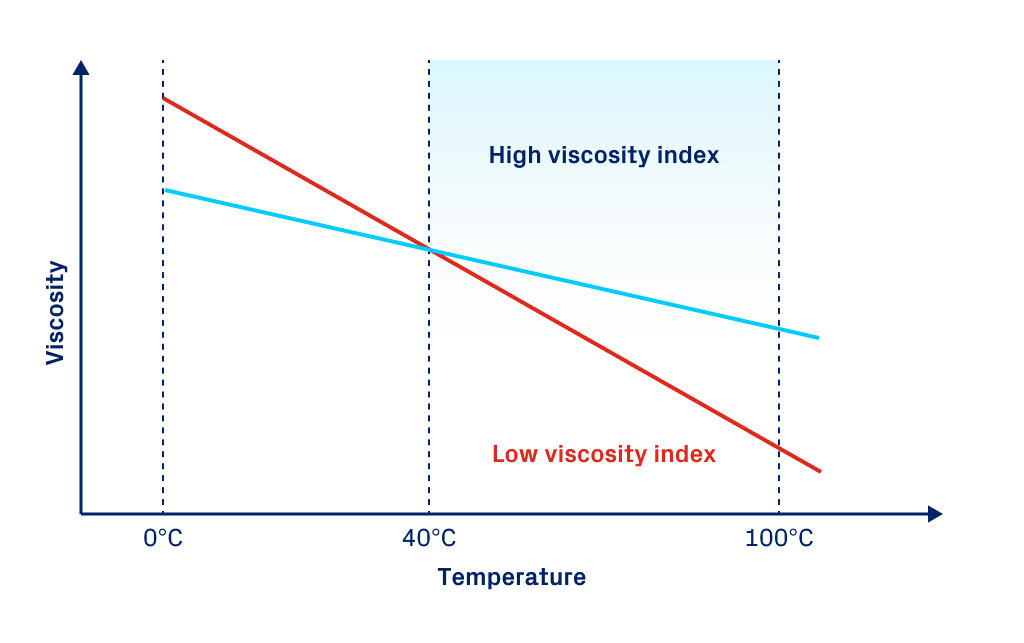 Hydraulic fluid is essential for the transmission of hydraulic power or energy, in a range of industries from construction and agriculture to logistics and manufacturing.

Any heavy-duty machinery that applies force by pulling, pushing, squeezing, lifting or moving does so by transferring power or energy via hydraulic fluid, from a pump, through a hose, to a ram and cylinder, for example. 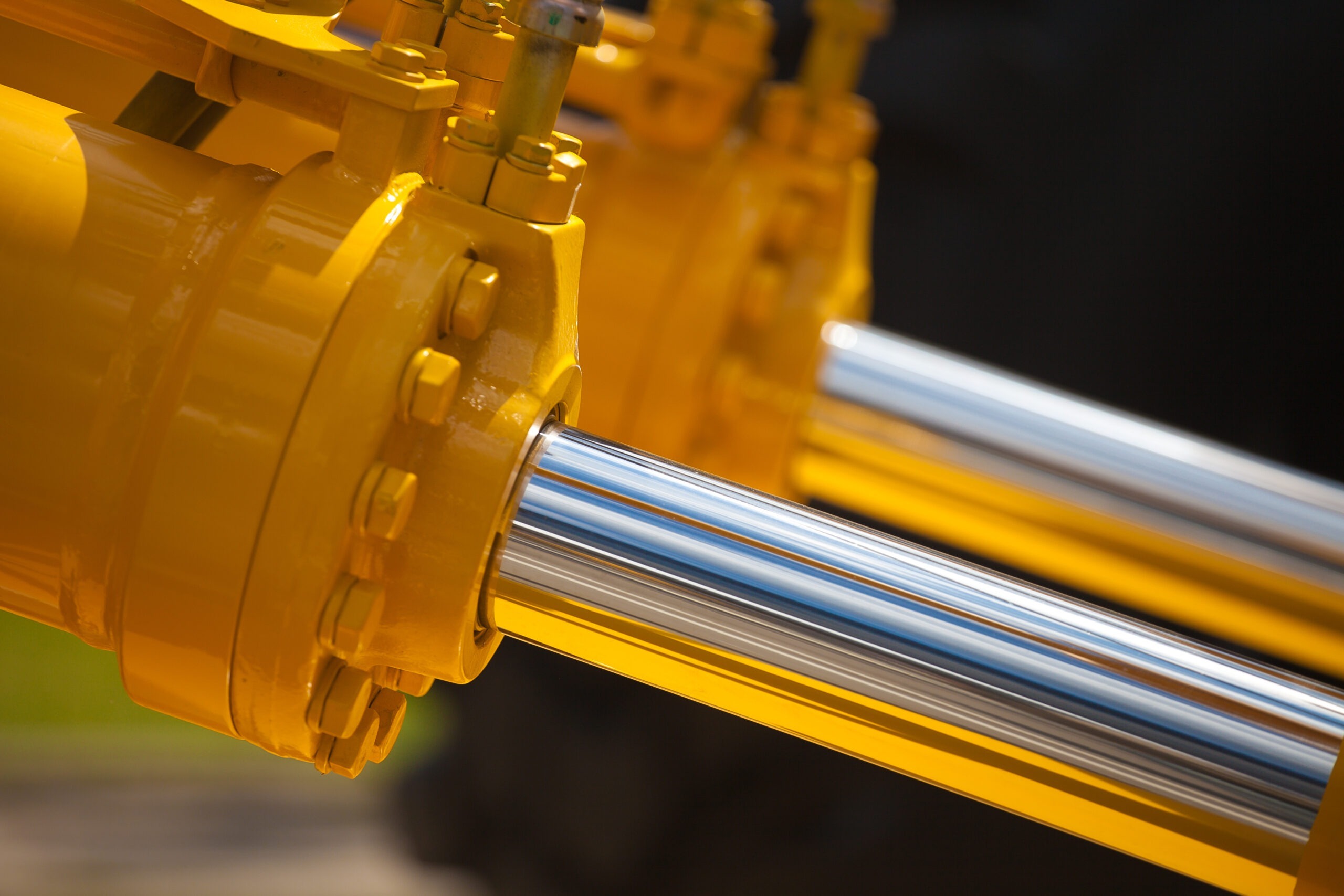 What’s hydraulic oil made of?

As can be seen in the diagram, hydraulic oil contains three properties, the main one being base oil plus an additive package and optional Viscosity Index (VI) improvers.

What are the different types of base hydraulic oil?

The benefits of virgin oil

Compared with recycled or remanufactured oil, virgin oil lasts longer and has about a third of the oxidation rate, i.e lasting for 6500 hours as opposed to 2000 hours. Oxidation will occur when oxygen mixes with the oil, as the chemical reaction creates a ‘varnish’ in the hydraulic system, and excessive heat will accelerate this varnishing effect. Recycled or remanufactured oil will become sticky and varnish systems more quickly, which leads to sluggish operation and increased wear. Over time, this will block lines, filters and valves.

What’s in an additive package?

The additive package, which is added to the base oil in hydraulic fluid has various properties, including; 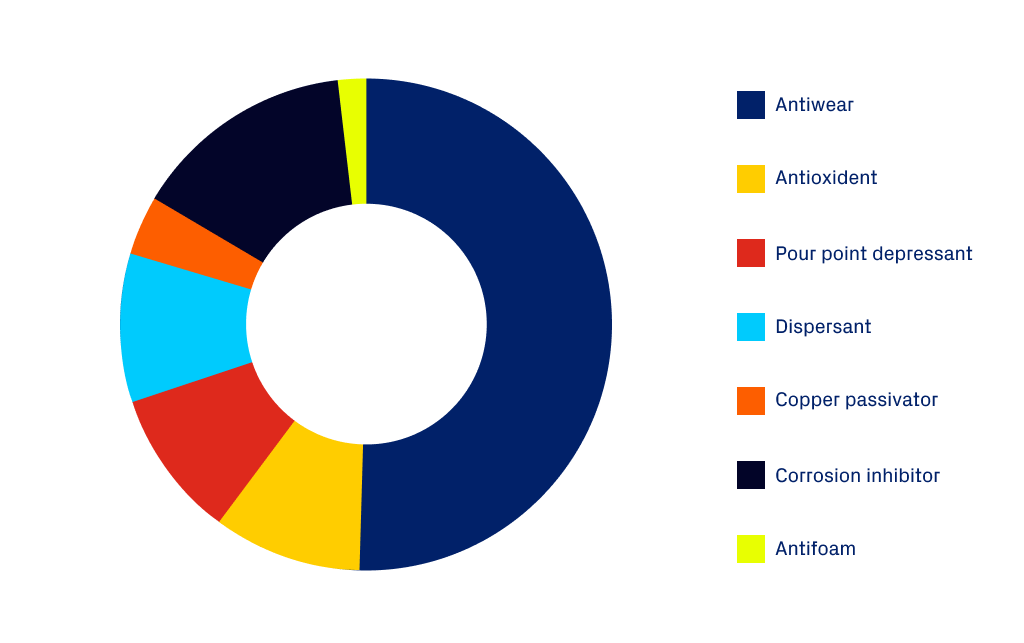 Why is the viscosity of the fluid important?

Viscosity is a measurement of a fluid’s resistance to flow; the higher the viscosity, the greater the resistance.

It’s measured in centistokes, which is the number you see at the end of any part-code e.g. Hyd-oil 46. The higher the number, the greater the resistance to flow and the thicker the oil will be.

Note that some hydraulic oils will have viscosity index improvers, aimed at obtaining more consistent performance over a wide range of operating temperatures. This is often indicated in the part code e.g.Hyd-oil-46 VHV1, where the VHV1 stands for a very high viscosity index.

As you can see in the diagram, the blue line represents an oil with a VI improver.

Note – Most hydraulic systems run with a typical ISO viscosity grade in the range of 22 – 68.

If the viscosity is too high and the fluid is too thick, it can cause a number of problems:

Likewise, if the viscosity is too low and the oil is too fluid, it can mean:

How do you know the right viscosity?

There are many types of hydraulic oil, as required by different types of machinery, ranging from 5 centistokes ISO (Kinematic Viscosity @ 40°C) to 220.

The vast majority of applications require either 32 or 46, with other specialist oils being necessary for a small percentage of applications. 10W oil, for example, which is classed as engine oil, can be used by some machines for power transfer purposes just like standard hydraulic oil, as specified by the manufacturer. 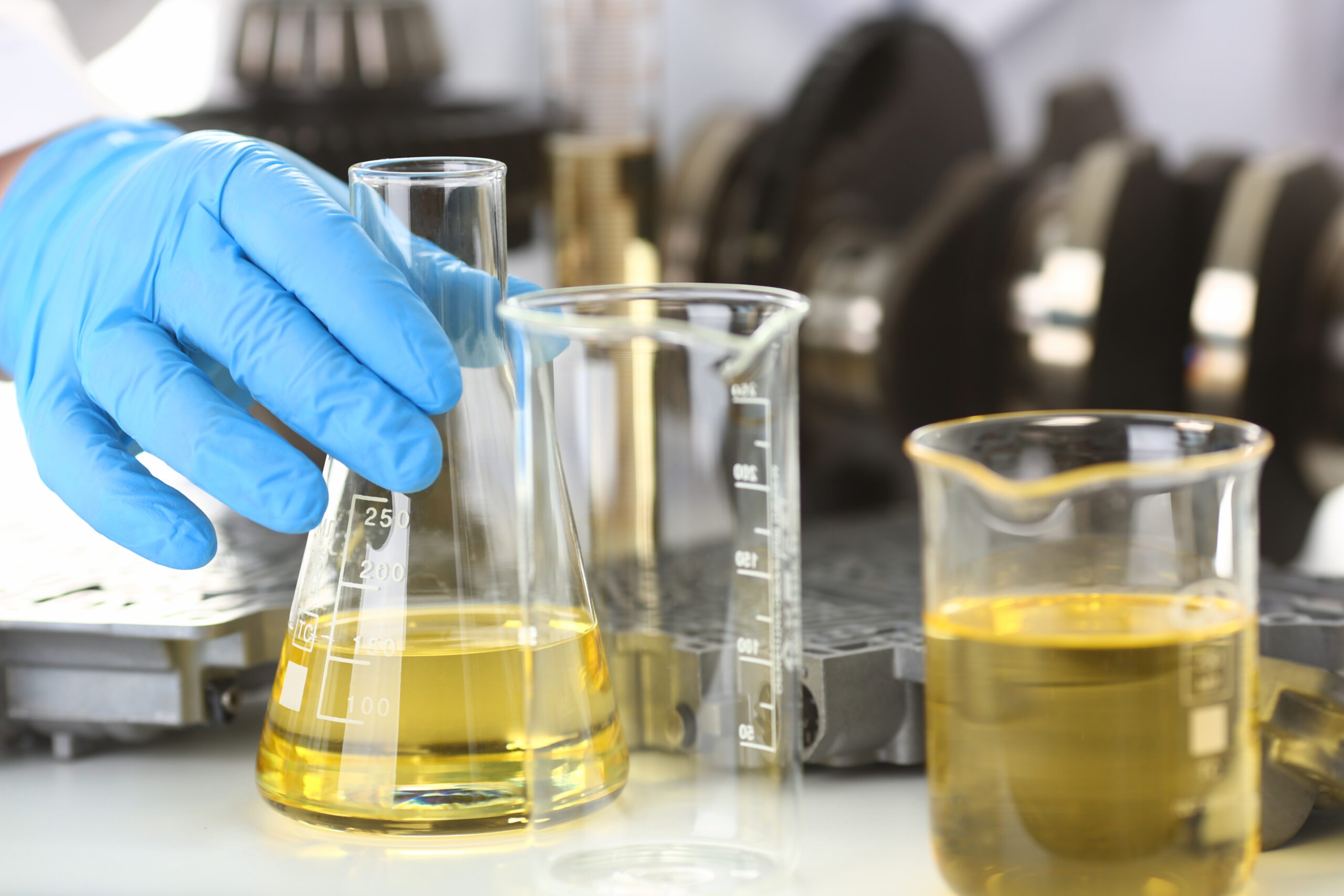 What does ISO VG stand for?

Short for International Standards Organization Viscosity Grade, the ISO VG classification was introduced in 1975 as and has been universally adopted as the standard unit for determining oil viscosity ever since. This enables the data to be interpreted by manufacturers and suppliers around the world, regardless of their country of origin.

What’s ISO VG and why has it been developed?

The purpose of the ISO VG system is to determine an oil’s viscosity or its thickness which is measured as resistance to flow at any given temperature.

Each oil is graded, after which it’s assigned an ISO VG number between 2 and 1500 that categorises its viscosity, i.e.how dense or thin it is. Oils with a higher viscosity (i.e.oils that are more dense) have a slower flow rate, and sit higher on the ISO VG numerical scale.

Why is an oil’s ISO VG number important?

The ISO VG number of an oil will help you to work out if an oil is the right viscosity for its intended use, so it plays a vital role in the performance of your hydraulics powered systems.

Using an oil that’s not the correct ISO VG number can cause premature wear to your machinery, poor heat dispersion or raised temperatures, all of which may result in serious hydraulics failure that could take your operations offline.

How can you select the right hydraulic oil?

Hydraulic oil is available in a range of viscosities (determined by the ISO VG number or cSt) as well as different chemical makeups – both synthetic and water-based.

Which hydraulic oil to use for your application depends on the operating temperature and pressure of your hydraulics system, together with the type of pump that powers it.

Synthetic hydraulic oils, for example, are better geared towards hydraulics machinery where pressures and temperatures can peak and swing, while water-based oils are more suitable in instances where fire poses a heightened risk.

That’s why you need to weigh up a number of variables, such as the viscosity grade, the hydraulic oil type and the additive package in terms of antiwear (AW) or rust and oxidation inhibitors (RO).

When it comes to selecting the correct viscosity oil for your hydraulics machinery, always make sure you follow the manufacturer’s instructions and choose a viscosity that falls within the specified range for your system’s hydraulic pump.

By sticking to the recommended guidelines, you will keep your machines in good working order and minimise the risk of any hydraulics breakdowns, which could take your business temporarily offline.

With that in mind, it’s important to schedule regular servicing and maintenance from a qualified hydraulics technician who can safely assess your systems, including the hydraulics oils. 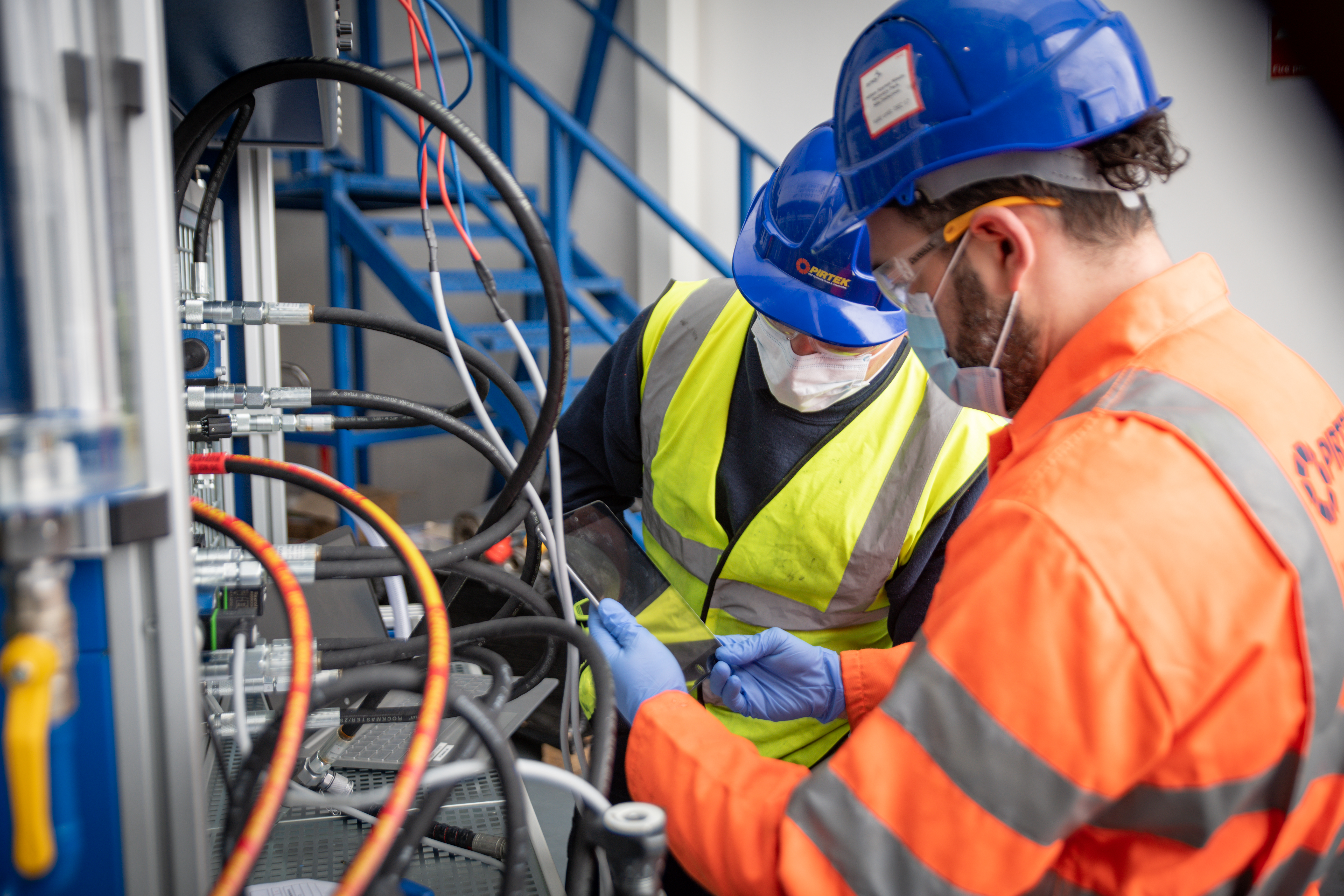 Making the move to biodegradable oils

Biodegradable hydraulic oil products are growing in popularity for a number of reasons.

They all have pros and cons so it’s worth exploring the options carefully. 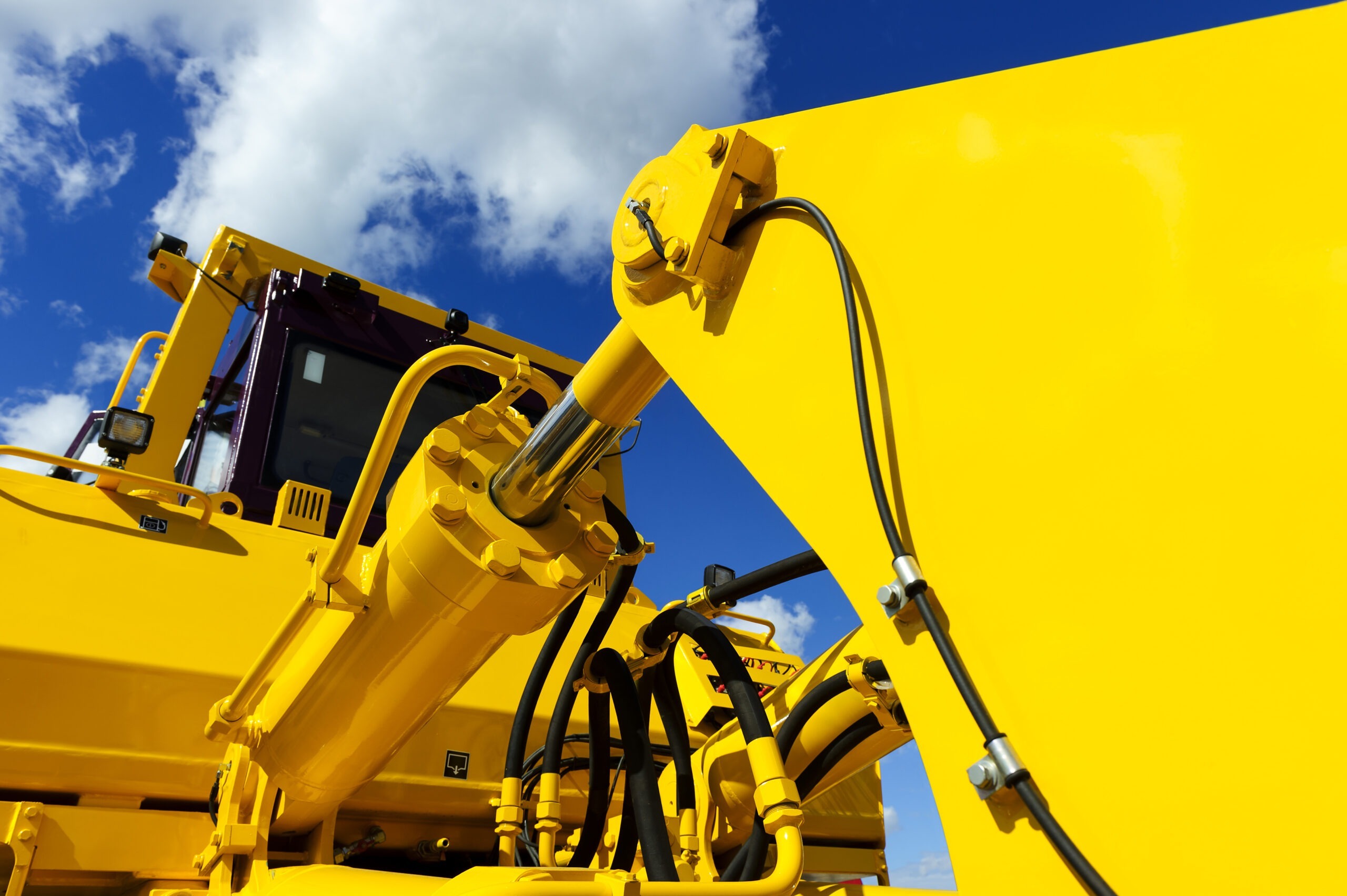 Some bio oils are highly biodegradable and non-toxic. Many also have high viscosity, excellent lubricity and good oxidation stability. What’s more, they can offer good corrosion protection and a long service life. They significantly reduce the environmental impact of oil spillages and, therefore, they are widely used in machinery that operates near, on or in water.

Some environmentally friendly fluids age quickly and are miscible with water which can damage their biodegradability. In addition, some can cause extreme thickening and gumming, affecting machine performance. Be aware that with some bio oils you may require a special system design.

If you are considering making the change, vegetable based hydraulic fluids are used in the same way as a traditional, mineral, hydraulic oil. Remember, however, never to mix mineral and biodegradable products and bear in mind the industry standard stipulates a maximum pollution level of 2%. It’s worth consulting your fluid supplier, equipment manufacturer and seal supplier before converting your system to an environmentally friendly fluid to check they are compatible.

Whatever hydraulic fluid you’re using, whether it’s biodegradable or not, make sure it’s in good condition and monitored frequently. Always speak to a qualified technician to make sure you’ve got the right hydraulic oil for your system.

The quality and purity of the oil in your system can degrade over time, depending on the temperatures and working conditions its subject to – as well as any small contamination of the system cause by hose failures. This can compromise the long-term health of your machinery, potentially causing costly issues. It is possible, however, to assess the health of the hydraulic oil in your system. Specialised equipment can be used to sample and analyse the fluids on-site, and assess whether a total or partial replacement is needed. 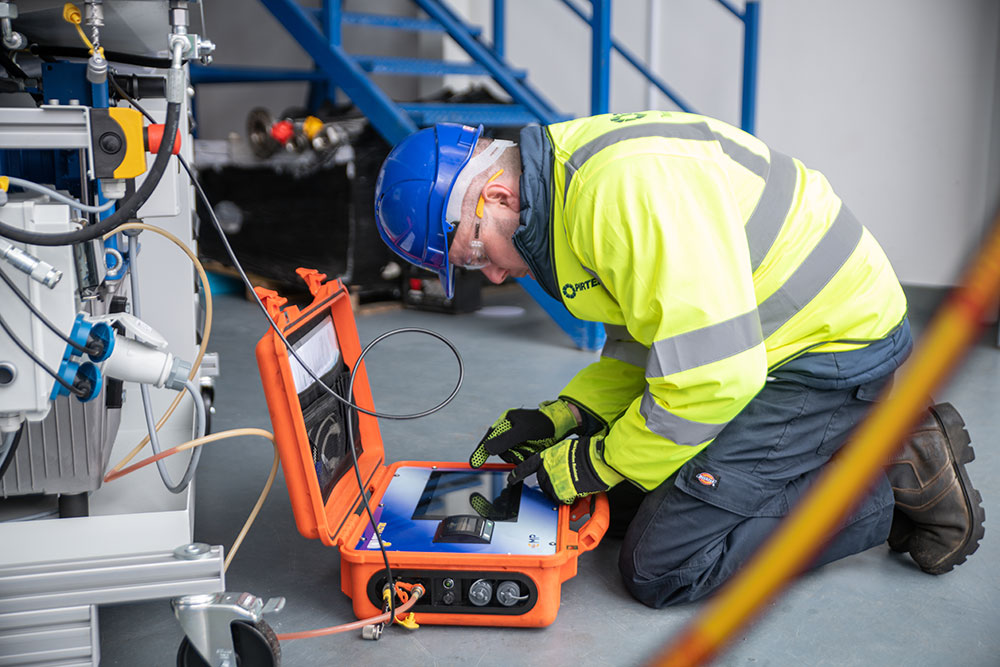 For any help with oil selection or to arrange a check-up of your hydraulics system, contact your local Pirtek centre or trade counter.

All the fun of the fair
Next time you are hurtling around a track or being flung upside…
Interview with Martyn Smart, QHSE Manager at Pirtek UK & Ireland
Our health and safety competent person, Martyn Smart, has carved a promising…
Hydraulics and pneumatics in food and beverage production
Hydraulic systems, due to their extensive application in heavy-duty machinery, are not…

Any cookies that may not be particularly necessary for the website to function and is used specifically to collect user personal data via analytics, ads, other embedded contents are termed as non-necessary cookies. It is mandatory to procure user consent prior to running these cookies on your website.